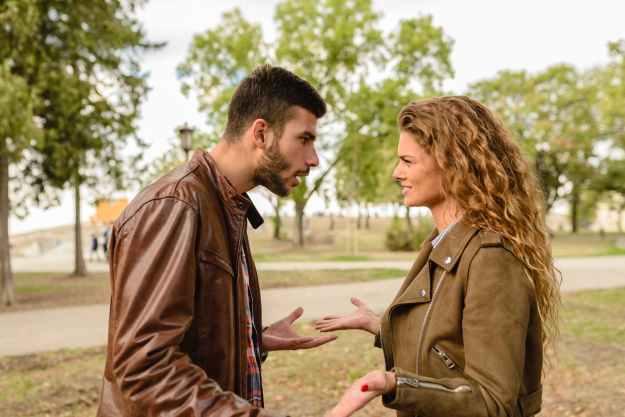 I hate stock photos so I decided to start using the most dramatic ones.

Have you ever been sitting in a room listening to people talking to each other and realized they aren’t talking about the same thing? It happens all the time. In meetings, on projects, in personal relationships. We think the words we use have concrete meanings, but they don’t mean the same thing to everyone.

There are words only certain people can say and there are words that just mean different things in different contexts. A perfect example of this was me getting annoyed that a coworker referred to me as the “Brand Voice Gal” because, ugh, rude, but at the exact same time I was making extensive Galentine’s plans.

Sometimes people mishear each other or otherwise misunderstand. I’ve been in meetings and said something that was directed at one person, but someone else thought it was directed at them. I’ve misread texts, even after reading them multiple times. There’s a smiley face emoji that I swear is smug and condescending, but other people think it’s the perfect punctuation for when you’re asking for something but don’t want to seem demanding.

It’s this one 🙂, look at that smug face.

Then there is hearing things out of context or just parts of conversations. It happens time and time again in headlines. When we see a questionable headline we should dig into the rest of the article or beyond an article. And we should do the same with people.

Words are powerful, they can do a lot of damage, and we can’t control what they do after they leave our mouth. We should do whatever we can to be aware of the impact the words we’re using have. We should look at cultural significance and consider other people’s backgrounds as much as possible.

But ultimately, we can never communicate perfectly, our very language prohibits it. So when we’re on the listening side, the best thing we can do is clarify what someone meant.

If we really want to love and understand people, or even just be able to work with them better, we should give them the benefit of the doubt.

Continue the conversation instead of storming off to rehash their words in your mind over and over until you’ve analyzed them to death. Try asking “Why?” or any other number of clarifying questions. Why did you say that? What did you mean by ______? Once we understand the why of it all the conversation can continue and communication remains open and productive.

And on the other hand, speak clearly and kindly as possible, because you don’t always get a chance to explain yourself.

Photo by Vera Arsic on Pexels.com.

Hulu does not have as many options as Netflix when it comes to RomComs but it does have some of my all-time favorites.

When Harry Met Sally (1989) – Just one of the many great things to come to life in 1989, this is my top RomCom and I’m happy to see it back on Hulu. The acting is brilliant. It has two of my favorite scenes in a movie, both where a character talks about how the person they were with has moved on to someone else. It shows the value of friendship that makes it much more satisfying than a plot line where two people meet and fall in love immediately and everything is just breezy and peachy. It feels like real life and it’s lovely. It is quotable.

Bridget Jones’s Baby (2016) – This is one of my top romantic comedies of all time because two men are fighting over an older pregnant woman and that’s how it should always be. Bonus: The first two Bridget Jones movies are also on Hulu.

The Mindy Project – This is the greatest show of all time and was created by a romantic comedy queen. Some of my favorite episodes are Hooking up is Hard and later episodes that parody You Got Mail and When Harry Met Sally, but they’re only worth it if you have been through the rest of the episodes leading up to it. I know not everyone will feel this way, but Dr. Mindy Lahiri is one of the most relatable characters I have ever come across. The writing is hilarious and the subject matter is often irreverent but in the best way. And boys like it too, for reals.

Four Weddings and a Funeral – If you like the drama of RomComs this one is for you. It’s still very funny, but it’s even more about the twists and turns and dra-ma. It has attractive people in it. It is a ten-part series based on the original movie, but not the same. Their outfits are amazing. I love Mindy Kaling and Matt Warburton.

Hitch – It’s Will Smith. It’s charming. We love seeing cool guys outside of their comfort zone. It’s got real heart.

What Men Want (2019) – I enjoyed this one more than I thought. It answers the question we women are all asking, can a woman have it all?

Overboard (2018) – Funny. Great acting from Eugenio Derbez. I love him in this. That’s all.

Ghost – So I’m more of a fan of the musical–it’s got some great numbers in it. But this is a classic, you need to see it to get all the references. It has hot people. It has ghosts. It has pottery. It has comedic relief. It’s got–kind of a weird plot, to be honest, but it’s a CLASSIC.

Say Anything – Also CLASSIC. Do I actually like it? HARD TO SAY but that CASSETTE PLAYER.

My Best Friend’s Wedding – A good reminder that you can’t always get what you want, even if you’re Julia Roberts. Great soundtrack. Hot people.