Not to be confused with Soylent Green. 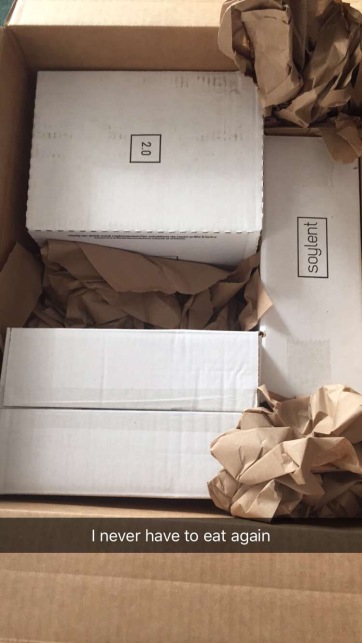 Over two years ago I heard an interview on NPR (I thought it was NPR but now I can’t find it so maybe not) with a man named Rob Rhinehart. He had been working on a formula that would replace meals and to prove it he lived off of it, without any other food, for three months.

So naturally several articles came out being like, “Why does this guy hate food?”

But it’s not that at all. The point is, you should eat delicious food, and when you can’t, you should just consume the nutrients you need. So instead of going to get crappy fast food made out of who knows what, or wasting time on making food because you feel obligated, you can enjoy food.

So Rob got rid of his kitchen and fridge. He drinks Soylent and when he wants good food he leaves it to the pros and goes out to eat. He said with the money he saves he can take people out to lunch and with the time he saves he can focus on other things.

Personally, I think I’ll keep the kitchen, you know, for brownies and stuff, but how cool is it to think there’s something that people on low incomes or no incomes or poor college students could live off of if they had to. I don’t know if it really is something I’d want to live off of for years and years but it’s definitely better than Ramen. So while people are like, “ew gross” or “food should look like food” I think it’s cool someone is trying to solve world hunger.

It’s like dry shampoo. You could go throw the whole effort of showering, or you could just dump some stuff on your head and you’re good to go.

It’s not just vitamins. The formula includes fats, proteins, and Omega-3s and other science stuff I’m not qualified to try and explain. 2.0 is made with Algal oil. “Produced efficiently in bioreactors rather than traditional farms to conserve enormous quantities of natural resources while providing energy and essential fatty acids.” How cool is that? There are some people who find the ingredient list alarming but I’m going to take my chances for the sake of experiment. Weird names on the ingredient list doesn’t stop me from eating Cheetos and in the nutrition world everyone just argues back and forth, somehow the same thing can cure cancer one day and give us cancer the next. 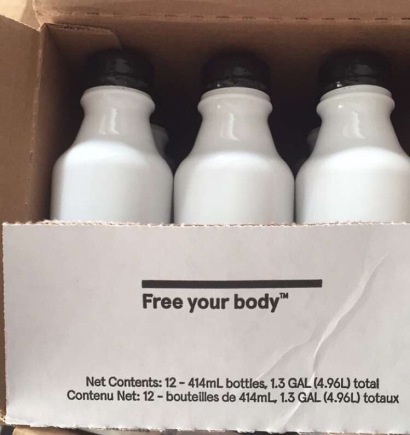 For me, personally, I’m excited to try it because I have grown to hate food. I hate that it makes my stomach hurt. I hate that it takes so much of my time. I hate that I never remember to eat breakfast and sometimes forget lunch and if I wasn’t married I’d probably forget about dinner too. I love food, but it also stresses me out. By eliminating some of the stress I think I’ll be able to enjoy food more. Food should be enjoyed not just endured.

How does it taste? Well, I wanted to get a candid reaction. So here you go in the form of two snaps:

It could be better but I like that it’s not trying to be some fancy flavor and I’m sure it’s kept their costs lower because they don’t have to offer a variety. It just is what it is, with no frills or promises of weight loss. Just something some guy made and has been living off for years now. I’m going to try adding chocolate to it and see what happens. It does have a weird after taste so I had some berries. See? I’m not forgetting about real food.

I ordered the 1.5 and the 2.0 so I’ll let you know what happens and if it makes me feel not hungry or if it kills me or whatever else might happen.

Is it the food of the future? I don’t know, I’m also going to eat lots of popcorn today because it’s national Popcorn Day.