“Day 2: “I don’t remember” : Same rules as last time. Write “I don’t remember” at the top of your page. Eight minutes, no stopping, don’t think about it too much–let yourself go and whatever shows up on the page shows up. No censoring or editing.”

I don’t remember a lot of things. I try and think about being five years old and I don’t know. I remember my mom throwing me a circus themed birthday party but I can’t remember which birthday it was exactly.

My dad juggled apples. He would take a bite out of them while he was juggling and I thought it was super funny. We made masks out of paper plates. Tigers, lions, and elephants. When I was little I always wanted to be an animal instead of a person when I played or when it came time to pick a costume for Halloween.

I feel like I have one memory from each year at school but it’s harder to keep track of memories before school.

First grade I remember our teacher was sweet and always smelled like creamy coffee. I remember I threw up and she rubbed my back for me until my mom came. I remember one time someone someone stole lunch boxes and we had to figure out who it was. I had a hand-me-down Duck Tales lunch box and my friend had a Lion King one and I was sort of jealous but not that jealous because Lion King was/is my favorite  movie but her lunch box had some sappy image from the Can You Feel the Love Tonight scene. Our teacher would give us fireball candies and we always wanted to do whatever it took to earn them but then they’d be too hot for us so we would run them under water until they turned white (because the red candy coating would come off) I’m sure it was a huge sticky mess.

In second grade I was put in a special reading group with two other people. Because we were better readers and they didn’t really have a program for it, so we were supposed to go off by ourselves and read a book and write down any words we didn’t understand so we could talk about it later. We giggled as we discussed writing “buttocks” on the list to see if they would tell us what it means. We were reading some book where someone got shot in the buttocks with an arrow.

In third grade our class hamster died. I met my first new best friend Hillary. All my other friends had been since school started so there was something special about making a new best friend. When our hamster died we each put on a rubber glove and got to pet him one last time before we buried him in the courtyard. Can you imagine who came up with the idea of letting us pet him one last time but they were worried that the newly dead hamster had already collected enough diseases that we needed a glove to do it.

Our student teacher liked Elmo and had really long fake nails that would sometimes scratch on the chalkboard if the chalk she was using was to short. I was in a special group for math but it was bigger than just two other people. I really liked doing timed tests for multiplication. I really liked math.

At some point in school I was told I couldn’t draw in the margins of my paper. I’m still not sure what margins are for then.

Fourth grade we drew our own Pokemon cards. Our elementary school was a hospital at one point and it was more tall than it was wide so each year you got to move higher up in the building, except for third grade when we were in the basement. It flooded one time and we had to hop over the water. The bathroom had penguins painted in it but was still kind of scary to me.

Fifth grade we were on the top floor. Our teacher was an artist. My mom made sure I got her because my brother had had her before, I think. She taught us how to draw a hummingbird. You draw the eye and then connect the beak. We had to walk up and down so many stairs to get to lunch or the library or recess. 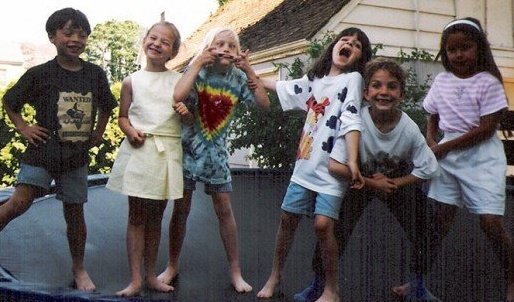